The Paris metro is a fast and ideal way to travel from one neighborhood to another.
During rush hour, the trains are packed butt-to-butt with Parisians going to and from work.
Mornings are interesting.  It is not unusual to see fresh loaves of bread jutting out of backpacks like swords.
Everyone in our group wore ear plugs.  Our guide used these to give us instructions - when to board and when to get off.
No one was ever left behind.  If anyone missed the train, we waited at the next metro stop until everyone arrived.
​Photos of the Paris subway are shown below.

​It was a short​ ride on the metro from our hotel to the Ile de la Cite, one of two remaining river islands in the Seine.
Being the location where the medieval city of Paris was originally founded, it is the center of Paris.
On the Place du Parvis de Notre Dame, the square right in front of the Cathedral, there is an engraved plate with an eight-pointed star/compass imbedded in the cobblestones that reads: "Point Zero des Routes de France" (Point Zero of French roads).
It is from this point that all distances to and from Paris are measured.

​Notre Dame, a medieval Catholic cathedral consecrated to the Virgin  Mary, is the most visited monument in Paris.
It is considered to be the finest example of French Gothic architecture.
The stone carvings over the three doors/portals at the front of the cathedral are elaborately detailed.
The center door, the Portal of the Last Judgement,  is shown below.  It is the largest of the three.
The two side ones  are smaller in size but of equal proportion.
​Collectively, the front face of the cathedral with its twin towers is stunning. 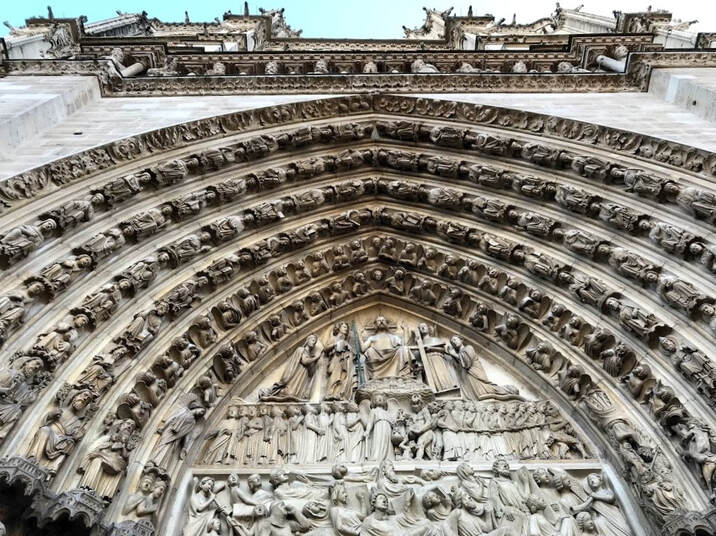 ​The Palais de Justice functions as the courthouse of Paris, which is also located on the Il de la Cite.
A photo of the front side of the courthouse is shown because it reflects the main themes of the French Revolution:
LIBERTE, EGALITE, and FRATERNITE. 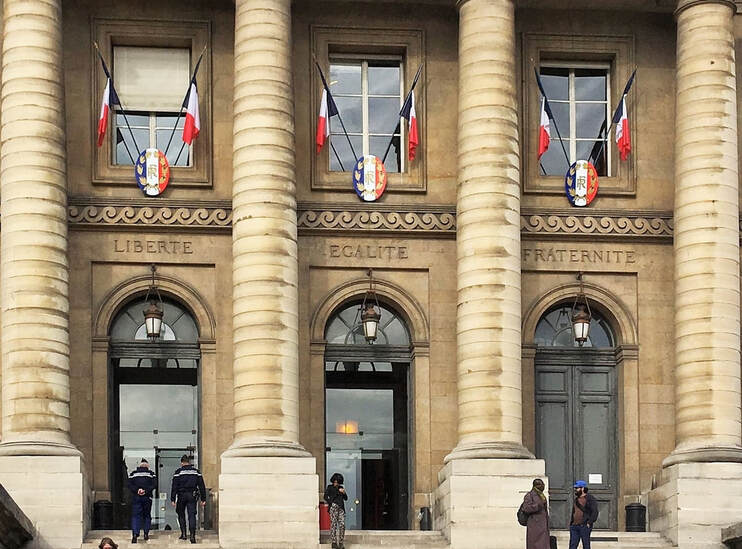 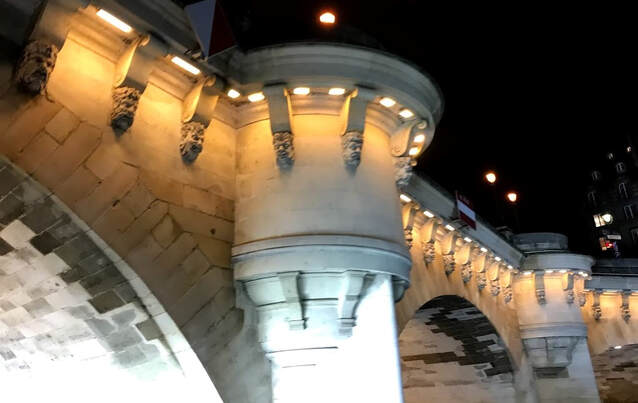 Pont Neuf.
​
​Paris began on the Ile de la Cite
​more than 2,000 years ago.
Along the Right Bank, you pass
the oldest existing bridge in Paris,
Pont Neuf (about 1600).
It is decorated with 381 stone masks. Each stone mask is different.
The photo at right shows the heads illuminated at night.
Pont Neuf means "New Bridge" -
​yet, it is Paris' oldest!