Knowing the tour didn't cover everything we wanted to see, we chose to stay two additional days to visit the places mentioned on this page.  If you thought Versailles was over-the-top,  get ready for a second mind-blowing experience at the Paris Opera House, Palais Garnier.
Being Phantom of the Opera fans, we had to see Box 5 (pictured above). The updated, modern ceiling by Marc Chagall was bonus!
Surprises await you at every corner - from illuminated sculptured walls and archways, formal opera dress gowns, to the opulent Grand Foyer with its painted ceilings, gold-leafed woodwork and statuary, and stunning crystal chandeliers.
Its hard to imagine being a participant to such formal affairs.  Its architecture moves seamlessly from simplicity to ornate - without conflict!
Our visit to Palais Garnier was fast-etched in our memory.  Every time we see the "Masquerade" sequence from Phantom of the Opera,
we are transported back in time.  A past memory becomes present once again.  Who knew a Rick Steve's Tour would have such impact? 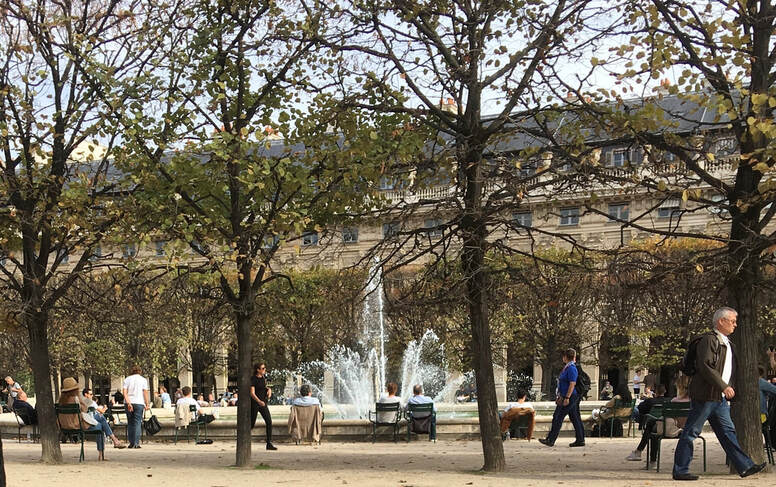 The fountain in the Palais Royal Gardens.
After a long walk from Palais Garnier, we needed a rest.  We chose the Palais Royal Gardens, being  just across the street from the Louvre.
It was  also real close to Angelina's, the 120 year old patisserie in Paris renowned for its hot chocolate and pastries. We gave it a try!
The last thing we wanted was to stand in a long line - for surely that is what we found upon arrival.  We were please to find out:
Angelina's has take-out!  We ordered (1) hot chocolate and (2) pastries which we carried to the park with fountain shown above.
Our choices were perfect for an autumn day. The hot chocolate was the best ever, bar none!  It was thick, like a milkshake,  ONLY HOT!
We shared one pastry and took the second one back to our hotel room to eat later that night.  Summed up: the day was JUST AWESOME!

This was the second time we found men playing petanque in the middle of the afternoon.   It is the French version of bocce ball,
played with metal balls on a dirt surface.  It's more of a tossing game (like horseshoes) rather than bowling. We laughed at the men
as they  taunted one another, hoping to distract and mess up the thrower.  And yet, at the same time, they displayed such seriousness
as they eyed the flatness of the surface and the location of the opponents' balls before making a toss.  It was an enjoyable break!

A trip to Paris would not be complete without shopping.  Galeries Lafayette is a French upscale department store in the
Opera District of Paris.  You can wander through floors of beautiful designer collections searching for the latest in fashion trends.
​Of particular interest is its famous Art Nouveau dome (shown above) made from colored glass and ironwork.  The entire center
of the store is open so that it can be easily viewed.  There is a 27' long viewing walkway on the third floor that lets you get right into
the middle of the dome. The scroll work on the curved arches are finely detailed making them spectacular.

You will find covered arcades/galeries throughout all of Paris filled with ready-to-wear boutiques, tea rooms, gourmet food shops,
wine cellars and bookstores.  They offer a different kind of shopping experience. Galerie Vivienne, next door to the Palais Royal,
with its mosaic tile floors, is one of the most iconic covered passages in Paris.  You just don't know where you'll get your next glass
​of wine or a side order of escargot.  NOTE:  You do have free time on a Rick Steves Tour to visit places of interest to you!
Be open to being delighted by the unusual - in the most unlikely of places along the way!